Communicator at Fundación Platoniq and campaign advisor for the civic crowdfunding platform Goteo.org. I believe that every communicative act has an intention and I like to be aware of this in order to explain how every social impact project, no matter how small, can improve the lives of many people.

Before proposing this article, we spoke with the Asociación para la Recuperación de la Memoria Histórica to give us their opinion and were firm in their point of view: any related initiative should be subsidized by the State. Unfortunately, that is not the case today. For this reason, after an internal reflection, we invited two groups that had reached some of their objectives to dialogue after launching campaigns using our platform. We wanted them to talk freely and openly.

These two campaigns and their respective groups to which we refer are La Intervención en la Fosa de Parasimón, of the Association of Relatives and Friends “Fosa de Parasimón” and Denunciando al Torturador, de La Comuna Presxs del Franquismo.

For our happiness, the collectives accepted, putting us in contact with Toño (Parasimón) and Ana (Presxs del Francoismo). Thus, we arranged a virtual space where they would meet and listen to their experience.

Toño: Good. We started the project as a family task, which was none other than recovering the remains of my grandfather, who was in a common grave. My grandfather and other companions. The idea was to start with a family project and give it a more civic, more social content. Why a risk that all these initiatives have is to end up privatizing what we think has to be a public and collective task. Therefore, apart from needing to finance the project (the people who participate in it are volunteers, but every act of exhumation has ineludible derived costs), what we wanted was to involve civil society and to be welcomed by other types of people, other people… and also take advantage to denounce the inaction of the State. The oblivion of their obligations to the citizens of this country who are unjustly buried in graves. Those were the three legs that covered our project: finance, implicate and denounce.

Ana: It is true that our mission is not to exhume anyone… but we follow the same line at the end. There has been a series of facts that have not been investigated for how things have been done in this country and that are being financed through private individuals when it should be directly investigated by the State. That is why we have already done two campaigns. One on Billy the Boy, campaign whose forcefulness was quite large as it could be seen in the media. Now we are with Martín Villa, the political leader of the previous case, as could be seen later. He was never tried and that is our mission: that society knows what has happened and that from there, action is taken. Our work goes towards the goal that people join this idea. A sign that we are on the same path, is that you (referring to “Parasimon Stones”) are also in the Argentine lawsuit.

Toño: Yes. The results on the exhumation in Parasimon will be presented in this complaint. We were already going to declare the consulate of Argentina in Madrid when Carlos Slepoy came in (president for 10 years of the Argentina Pro Derechos Humanos Association). Our intention is for the Ministry of Justice, as part of the State, to assume its responsibility. All international conventions force certain things, and we consider that the State does not want to act.

Ana: That’s right. A few months ago, in October, I think, came Fabián Salvioli, special rapporteur of the UN on the promotion of truth, justice, reparation and guarantees of non-repetition. He informed us that there are more than 9000 complainants in the Argentine judicial complaint. Here we are taking little steps: the lawsuit against Billy the Child, for example, is already admitted.

Toño: Right. In the case of Parasimón, in Asturias, there are about 300 graves… most will be lost and no one assumes any responsibility. Because we… we do something we do not want to do . I have no interest in going with a pick and a shovel to look for my grandfather. That’s what the State has to do. Why do not they call Martin Villa and have him declare? There does not have to be a person behind insisting when it comes to a matter of normal and ordinary justice. In that circumstance there was the option to ask for money from nearby people, who did not seem the way, or to throw ourselves into the pool of crowdfunding. Because for us it was something that we had no idea how it worked. To put it in some way, our mistake was to be unambitious. We did not imagine that the answer was going to be what it was: we collected the money we needed much earlier and much more easily than we thought it would be.

Ana: Yes, both projects were in the campaign, with the first round of financing already finished, when El Silencio de Otros was released. The success of the footage could have helped, although it was not necessary, because at the media level, both related and general, the Billy El Niño campaign moved very well and we received requests from more than 25-30 media every time we communicated a step.

Toño: The response was very exciting for us. Of people who said they were going to support us and did it. From people you do not know and sends you their contribution and love… Soon we will promote a new exhumation, this time not by crowdfunding but by pressing the State to do it, giving them everything necessary at the level of information. We want to take advantage of the fact that new Historical Memory Law in Asturias and that we have the collaboration of the University of the Basque Country with the tasks of DNA analysis. There is a lot of work ahead and we want to involve the State. We want to thank the help we have received, from IU Gozón, IU Asturias, Memory Commission-IU Aller, and PSOE Lena; Also collaborated “Compromisu por Llena, etc. But everything is very intricate, you have to ask for permits and carry out several administrative processes.

Ana: I think the objective is to create movement so that between them, in the end, they will assume it. The idea is to make a political impact on everything that we believe should enter into justice and memory. Cover all those aspects that should be solved by the State and not the entities or the citizenship.

If you want to know how the dialogue continued, we invite you to view this and other cuts that we will be posting in future updates in this same article.

From the Goteo Foundation, we see that this same goal of creating movement happens not only with the Historical Memory but with other civic projects, such as in the campaign #LibertadParaInformar, where they made an appeal to share solidary and responsibly the economic sanction imposed on Clemente Bernad and Carolina Martínez to investigate masses of clear Francoist character celebrated in the crypt of the Monument to the fallen of Pamplona. Which it was the result? They gathered in just 3 days! €5,489 required to pay the entire fine. Incredible, hopeful and inspiring.

In them, the citizens organize themselves, launch their campaign (which we call “political advocacy”) and so many times the political sector ends up “having” to pay attention when they see the support they have been able to raise. We see how the pressure that subsequently leads to change is generated. We believe that each of these steps leaves a Democratic Footprint that allows us to continue advancing towards the society we desire and deserve. Soon we tell you more about the three Footprints that we will be driving from Goteo: Social Footprint, Democratic Footprint and Ecological Footprint.

To finish, we want to thank you very much to both groups for your collaboration and trust. It is a pleasure to work on seeing how things change. How to fight. We continue! 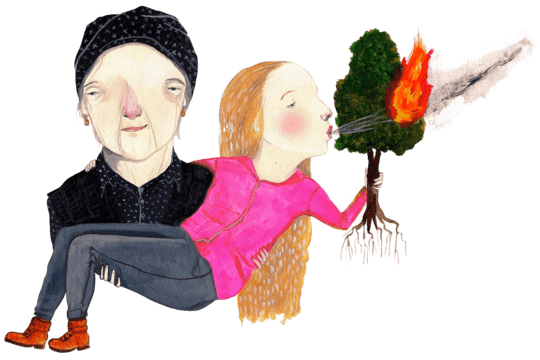 The emptied Spain and its fires